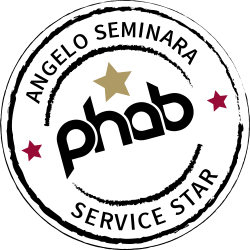 Angelo Seminara is one of the most captivating and original hair stylists of our time. Four times winner of the BHA British Hairdresser of the Year Award, Seminara's work is hugely influential and is avidly followed by hair professionals, photographers, stylists and models the world over. Angelo quickly gained a great reputation in the fashion arena. Paris, New York, London and Milan fashion weeks soon featured on his itinerary, working on runway looks for Chanel, Valentino, Hermes, Stella McCartney, Dolce & Gabbana, Alexander McQueen, Vivienne Westwood... the list rolls on.

Alongside a remarkable celebrity client-list, Seminara was the Artistic Director for the innovative Italian brand Davines Spa from 2011 to 2019. After taking up the position in 2011, Seminara began ground-breaking research into new hair colouring techniques and invented a new innovative colour instrument, Flamboyage, in 2012. After 3 years research and constant attempts and re-formulations Davines’ and Angelo’s creative union led to the launch of a new range of hair products, ‘Your Hair Assistant” in 2016, to critical acclaim. Angelo then went on to create ‘The Imprinter’ in 2016.

In July 2020, Seminara became Goldwell’s new Global Ambassador, an exciting collaboration destined to advance the future of colour and styling. In the same year, Seminara opened his first-ever salon in London's Knightbridge.

Seminara’s rapid rise to fame is built on a life-long passion for hair. He began his career as apprentice to a barber at the age of 11 in his hometown in the south of Italy and went on to work for Toni & Guy in Rome. In 1995 Seminara moved to London where he soon became the protégé of Trevor Sorbie, eventually taking on the prestigious role of International Creative Director for Trevor Sorbie PLC. Since the beginning of his career he has been passionate about sharing his knowledge and his ideas and has been teaching and inspiring hairdressers around the world.

Having just opened my salon in London’s Knightsbridge, we are now in the process of organising sustainable systems for it.

International Hairdresser of the Year Award

International Hairdresser of the Year Award

THE IMPRINTER: Created by Angelo Seminara, The Imprinter is a revolutionary colouring technique for hair professionals, currently being redesigned for 2021. The Imprinter concept comes from the inspiring power of nature, imprinting ranges from strong colour contrasts, to the most sophisticated and subtle tones. Please email zoe@angeloseminara.com to be notified when The Imprinter relaunches.

Be the first to add one!

Reviews are subject to approval prior to publication.
Only your review and your initials will be published; your name and email are stored securely and not released to the public.